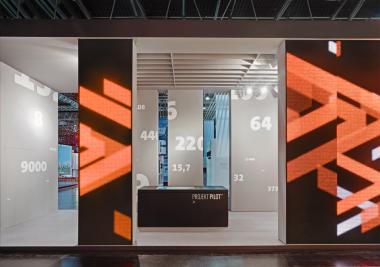 Projektpilot (Neuss, Germany) achieved to position itself as a service provider for communication at the EuroShop 2011.

Inge Brück-Seynstahl (Marketing, Projektpilot GmbH) says: “With our fair appearance we were able to strengthen and deepen our contacts to customers and design partners. Concrete inquiries and appointments that were agreed during the fair prove that the EuroShop is the right platform for Projektpilot as a general entrepreneur.”

With its second fair appearance at the EuroShop 2011, Projektpilot further developed the profile it shaped in 2008 as a realisateur for ambitious design projects. While in 2008 Projektpilot focused on its constructional competence in the implementation of highly complex design approaches, in 2011 the company from Neuss additionally highlighted its competences‘ diversity, which is essential for a comprehensive implementation of Corporate Identity in space. The stand architecture stated this further development in its architecture. If in 2008 it was the “analogue” cardboard sculpture that enthused the visitors and has been awarded in the meantime, in 2011 it was the expansion of the horizon that was visualized via a space arranged with multimedia.

The cooperation with the AV technology provider XL solutions shows, how Projektpilot arranges brand architecture that is complex with regard to its content. XL solutions from Düsseldorf provided the manifold multimedia choreography of the fair appearance – from the interactively controlled seamless LCD wall to the multitouch table to the animated LED wall.

People, who are interested in Projektpilot, can inform themselves about all services of the realisateur from Neuss on the new website after the fair. The website containing many images was introduced on the first day of the EuroShop: www.projekt-pilot.de